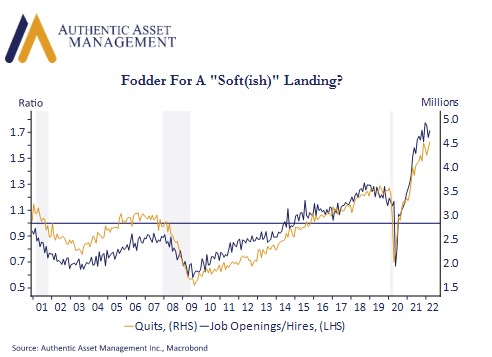 The FOMC meeting yesterday was notable less for the fact that the Fed raised rates at the fastest pace in 22 years than it was for what it says about the psychology of markets. The current year has been dominated about a re-pricing of risk driven by fears of aggressive monetary tightening and inflation. Bond markets have suffered the worst four month stretch of returns since the late 1970’s and equity markets (S&P 500) are off to the worst start in any calendar year since 2001. The reprieve in risk assets after Chairman Powell took 75bp’s off the table was palpable. It affirmed that the Fed promises to be predictably hawkish and not hurtle themselves toward an economic meltdown for fear of being behind the curve.

That was silver lining enough, for now, even if the Fed remains extremely hawkish and there was no evidence that the view of a Fed on autopilot to 2.5% policy rates is the wrong one. What happens after that is anyone’s guess. Rates will likely go higher, but that too will also depend on what Powell refreshingly admits are “forces beyond our control.” For now it appears markets are primed to move beyond peak fears on rate hikes, at least for now. Markets are also gearing to move beyond peak fears on inflation, at least for now, as all evidence suggests a roll over back towards 5%yy to 6%yy by year-end. The implication is that the surge in interest rates (10Y) is also primed to stall for now.

There is an elephant in the room, however. Growth forecasts for 2022 and 2023 have been trimmed but are still well above 2% and earnings expectations remain essentially unchanged over recent months. Getting to “peak fear” on growth is thus in its infancy and the next shiny object to fixate upon. Powell insisted as he must that the Fed can engineer a “soft(ish)” landing and reign in inflation risks. Doing so this time may be harder than usual.  The Fed can only affect demand driven price pressures and a good chunk of the current inflation regime is also driven by supply driven constraints.

The chart depicts something Powell alluded to several times in the press conference. It shows a labor market on fire and where Powell intends to make his mark on the demand side. The ratio of job openings to job hires is at record highs, and with it the Quits rate. Powell wants to bring this into more balance. This is the low hanging fruit and there is great scope to remove the froth here. The problem of course is that rates have a lagged impact on activity and labor markets are a lagging indicator of economic activity. Growth must slow to slow labor demand and the question will remain if Powell can slow growth just enough to slow job growth just enough to get this just right. The historical record on this front is not encouraging. Conquering peak fears is cause to celebrate, but we have another mountain to climb.