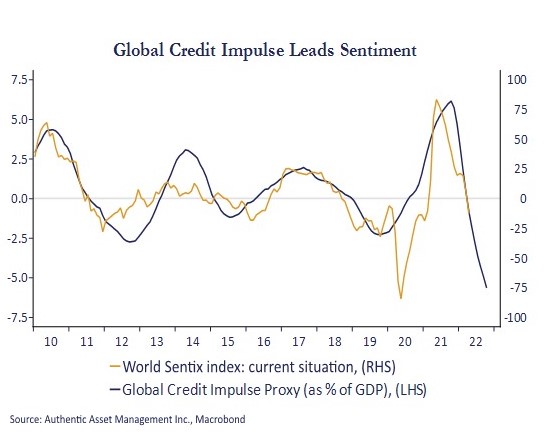 • Markets must now pay for the consequences of surging inflation, and this is the dominant theme driving global markets. It is a bill itemized by rising interest rates, the erosion of purchasing power, hawkish central bank policies and a withdrawal of the liquidity support that was a hallmark of the past two years.

• Global growth prospects have dimmed but have not been derailed. In this there is room for optimism though risks are clearly tilted to the downside as central banks scramble to tighten financial conditions and surging inflation erodes purchasing power and sentiment.

• The current year will be a difficult one for 60/40 portfolios. Both equities and fixed income returns are down on the year and at a high risk of both posting negative returns for only the fourth time in the past 30 years.

The adage in economics that there is “no free lunch” seems particularly appropriate to the transition underway in how we assess the global outlook. The past two years were dominated by Covid and a massive fiscal and monetary stimulus that overwhelmed the system with liquidity and gave markets much to cheer about as returns soared. However, the lunch bill is now coming due. It is higher than it had to be as stimulus probably persisted for too long into the teeth of what was a strong growth recovery. Markets must now pay for the consequences of surging inflation, and this is the dominant theme driving global markets. It is a bill itemized by rising interest rates, the erosion of purchasing power, hawkish central bank policies and a withdrawal of the liquidity support that was a hallmark of the spectacular rise in risk assets over the past two years. This is a new regime, one of heightened uncertainty. It also breeds an enduring shift higher in market volatility. The tragedy in Ukraine and surging commodity prices amplify what was already an expensive lunch bill.

The economic growth outlook for 2022 will be slower than expected several months ago, but slow growth is not the same as no growth. Estimates for growth in the US have been trimmed by about 0.5% in 2022 to 3.0%, by about the same margin in Canada to approximately 3.5%, and globally by 0.7% to 4.2% which is down from the 5.9% pace last year. These are still pretty solid growth projections.  Odds are rising, however, that they may be too rosy. The good news is that household balance sheets remain strong, as does labor market demand, and this provides some scope to absorb the erosion of purchasing power from higher inflation. Nevertheless, there are signs that higher interest rates have already shown signs of slowing demand, and with global trade slowing and government spending also weaker the balance of factors supporting growth are slipping. Europe looks especially vulnerable as energy costs take a disproportionately higher bite out of growth prospects. Capital spending looks to be a bright spot over the next year, and while credit spreads have begun to widen corporate balance sheets are also robust with the ratio of credit upgrades to downgrades still on a firm trajectory higher. Nevertheless, the risk is that this spending could also disappoint should sentiment and demand also prove weak. There are already signs this is taking shape.

The first chart shows the flow of global credit as a percent of GDP and that ratio is slipping as financial conditions tighten. It suggests global sentiment on economic conditions is likely to deteriorate further reinforcing a deceleration in growth. A similar sentiment is being reflected in a yield curve flirting with inverting, something that in the past always signaled an impending recession though with varying lags. A recession will come, eventually, but we do not expect it to take shape in 2022. The growth outlook has been dimmed considerably, but it has not been derailed, and in this there is scope for some optimism. The risks are tilted, however, to the downside.

Monetary policy has turned decidedly hawkish, and rightfully so. It is the first time in data going back to the mid 1970’s that the Fed began tightening from such a period of extreme accommodation. The chart shows these extremes in historical context. Nominal GDP (NFDP) less the policy rate gives a view of how much monetary juice the Fed provides for each unit of output generated in the economy. That is plotted against the real policy rate. That measure tends to surge out of recessions as rate cuts produce the desired rebound in growth and the beginning of the new cycle which the Fed ultimately fine tunes as the expansion matures, inflation rises, and the Fed begins to raise rates. The chart shows just how far the Fed has let this post covid economy run. It is not just very high, it is at a record high, and the gap between where the Fed wants to be and where they want to be is enormous. It gives us a sense of how high rates need to move and it suggests that only some unforeseen exogenous shock can shake central banks determination to rein in 40-year highs in inflation. As demand slows some difficult choices will have to be made between what is needed to bring inflation back under control against the risk of pushing the economy into a recession.

Interest rates have adjusted to this new normal. Inflation expectations are at record highs and real interest rates are at a 3 year high. The good news is that we suspect the 100 bps move in US 10Y rates is close to topping off as most of the expected policy tightening is already priced in and we are close to a peak in pricing inflation risk. The bad news is we could be wrong.  Rates could continue to move higher depending on how fast central bank balance sheets run-off (will be aggressive), and if long term inflation (5y5y forward) expectations which have remain well anchored begin to reflect a more persistent inflation risk.

Much will depend on how inflation risks evolve over coming months.  Central bank efforts to tighten financial conditions to better balance demand and supply, but a large part of the inflation picture is a combination of demand pull and cost push. This we see in supply chain constraints that remain close to record highs, and in surging food, energy, and metal commodity prices which is a residue of the conflict in Ukraine. The implication is that inflation will be slow revert to a 2.0% trend. Base effects do point to an easing of y/y changes by the end of 2022, but the risk is that recent price gains prove sticky or move higher than expected.

The current year will be a difficult one for 60/40 portfolios with both equities and fixed income at a high risk of posting negative returns. That has only happened four times. The good news for equities is that growth may disappoint, but consensus earnings of 9% remains intact as nominal growth remains above trend. A similar gain is expected in 2023, both of which in our view are too optimistic given growth risks and operating margins which have begun to pull back. The bigger question, however, is what an investor will pay for those earnings. With inflation high and still rising, trend growth slowing, and interest rates shifting we know the answer is likely less, not more. The forward PE multiple is currently 20. That is down from a high of 23, but still well above a longer-term average of 16. If multiples continue to trend lower, which we expect as our base case, then even a rosy earnings outlook in 2023 leaves little upside for equities from current levels. The S&P equal weighted index is already trading at a multiple of 18.  If the broader market follows that lower as expected, equities will struggle to eke out anything but modest gains this year.  In this environment, stronger growth in Canada suggests the commodity heavy TSX is likely to outperform.

For more articles by the author, please visit: www.authenticasset.com/perspectives/