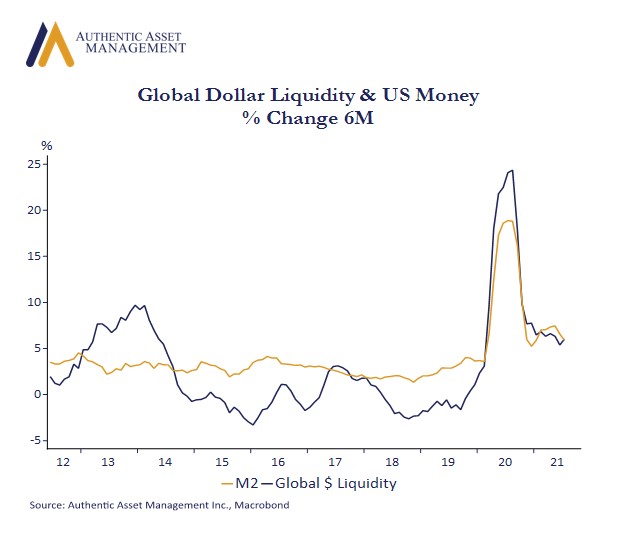 Global dollar liquidity surged in 2020 with the Fed’s $120B monthly bond buying program flushing the system with enormous sums of cash that facilitated the fastest post-recession gain in equities since WWII. All this liquidity needed to find a home and it did out the risk curve where investors remained giddy, paying a premium for earnings not seen since the dot.com bubble. That aggregate pool of liquidity continues to grow. However, the chart illustrates that the “delta” of this surge has been rolling over. As Fed tapering gets underway that weaker positive momentum will transition to outright declines in 2022.

That weaker momentum has thus far had little obvious impact on markets. Much of the slowdown illustrated above has been driven by the drawdown in the Treasury General Account at the Fed. This is accounted as a liability on the Fed’s balance sheet, the same as asset purchases. That account peaked at $1.8 Trillion in 2020 and remained as high as $1.6 at the turn of the year as the hoard of cash raised for fiscal stimulus (and monetized by the Fed) last year took time to spend.

The drawdown since February has been more than $1 Trillion which effectively represented a fresh injection of liquidity that may have helped push asset prices higher. Part of that drawdown also coincided with an effort by the Treasury to issue less Treasury securities (borrow less to pay down excess cash) and this relative scarcity likely provided a tailwind to Treasury prices. It may have directly contributed to a sharp reversal in Treasury yields that caught many by surprise. It may have also done so indirectly by forcing financial intermediaries to park excess cash into longer dated maturities to earn whatever incremental return they could. That drawdown is now complete. Bank holdings of Treasury securities have also begun to roll over.

Of course, a full economic accounting of these flows is rarely straightforward. Liquidity injections from this drawdown created distortions in the repo market and the surge in the take up of reverse repos effectively drained a chunk of liquidity from the system. Nevertheless, it is all consistent with the idea that liquidity conditions have already begun to tighten even with no change to the pace of Fed asset purchases. Those conditions will not become more accommodative. They will become less accommodative.

The Fed is right to divorce the idea of tapering from rate hikes. After all you cannot get to the former without completing the latter and frankly it is hard to determine when they will ever raise rates and how far they will go. Few are that prescient. However, it is increasingly clear the liquidity induced risk regime that set in after the onset of the Covid pandemic is now poised to adjust. It may have begun to do so already.