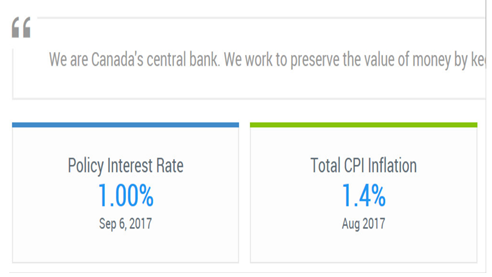 When I was a boy spending vacations with my grandparents in the Maritimes, some of our pastimes included playing cribbage, kick-the-can with the neighbourhood gang, adjusting antennae in an attempt to tune in one of two fuzzy TV channels, dinner table storytelling, and stringing Newfie jokes together to try turning groans into laughs.

Newfie jokes are simple. They just require somebody, anybody really, to be the straw man. Since Newfoundlanders are proud people with “funny” accents, and close at hand but not Maritimers, they made for a convenient choice.

Newfie jokes, like the late great Blazing Saddles movie and so many other comedic efforts, aged badly. Over time, they were banished through the galactic tear of political correctness.

It wasn’t until Sep. 27 of this year that I gave these relics a passing thought. The Bank of Canada Governor delivered remarks to the Board of Trade in St. John’s, Newfoundland.

Governor Poloz defined The Meaning of “Data Dependence” with regard to monetary policy as the “need to pay very close attention to all the information we receive, including data, sentiment indicators and intelligence, and make continuous inferences about not just how the economy is evolving, but how its behaviour may be changing.”

It was an ah ha moment: “data dependent” monetary policy made the most sense in a knock knock Newfie joke format!

“How long will it take to normalize monetary policy?”
I don’t know. How long?
“No one knows. It depends.”

On a stand-alone basis, this joke is quite the dry groaner. The only way such weak jokes have any chance of transforming rolling eyes into laughter, is if they are rattled off ad nauseam. For this reason, it makes me chuckle. A full chorus line of central bankers around the world have been going on and on, telling and retelling this joke. It feels clumsy and a bit off the mark.

Central bankers calling themselves “data dependent” is just a front. It is a front for taking a more laggard approach to reducing accommodative monetary policy than would normally be expected.

Underlying the verbiage of data dependency, isn’t data, but uncertainty. The litany of uncertainties highlighted by the Governor includes:

Uncertainty is the real bogeyman. Quite simply, there is a lack of understanding and ability to reliably model these issues. That’s fair enough, up to a point; that point is likely here just about now.

In recent years past, there were sizable gaps between the level of economic output and full capacity, with substantial lingering fears of downside risks to inflation. Beyond warranting a glacial approach to monetary policy tightening, “data dependent” needed to be neither descriptively accurate nor prescriptive. Economic activity stimulated by lowly interest rates was not in jeopardy of inducing undue inflationary pressures.

Time has brought healing. Today, while uncertainties remain, economies are in a better place.

Consider these Canadian data and Bank of Canada projections:

Economic growth is broadening, capacity pressures are rising, and business investment is increasing.

Furthermore, as the Governor said: “Any change in interest rates will not have its full impact on inflation for about a year and a half to two years. So, when we make our monetary policy decisions, we are less concerned about the latest inflation numbers—which are already a month old—than we are about where inflation will be in the future.”

Our view at AUTHENTIC, is that if “data dependent” monetary policy is going to remain the pet term of central banking circles, then a cycle of interest rate increases in Canada (and the US) should be anticipated over the course of the next couple of years. The data are perceptibly falling into place. Then again, we are always open for a good chuckle, and it all depends.